I realized that I have not posted anything about some of the great books I’ve been reading. 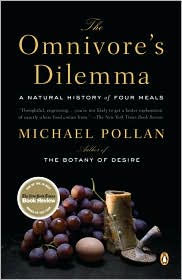 This summer I was on a bit of a non-fiction kick and devoured The Omnivore’s Dilemma.  As a huge fan of Barbara Kingsolver’s Animal, Vegetable, Miracle I was intrigued by Michael Pollan’s mission to follow four very different meals from farm/field to table.  The first meal begins in a conventionally farmed corn field where Pollan learns about overproduction, the truly bizarre economics of processed food, and the astounding fact that it takes 10 calories of oil to produce 1 calorie of food when it is produced conventionally!  Looked at purely in economic terms that’s a horrible bargain.  And that’s ignoring the greater costs of water and water pollution, soil deprivation, habitat loss and species endangerment!  From the cornfield Pollan follows his corn to a Concentrated Animal Feeding Operation (CAFO) where it is being fed to cows in order to fatten them up.  Pollan eventually follows his beef and corn to McDonalds where he eats them both in the form of a cheeseburger, french fries, and a Coke.  The most surprising thing to me about this particular meal is how much corn is in it!  Corn is in every element of the food and parts of the packaging.

Pollan’s second meal is an “Organic” meal purchased through WholeFoods.  This is industrial organic – something Pollan argues is a long way from it’s hippy roots and has lost a lot along the way.  It may be grown to organic standards but it’s still processed in much the same way that a meal from McDonalds is processed.  It also travels just as far as most other items in the supermarket, an average of 1500 miles.  For me this was pretty much a review of many of the things covered in Animal, Vegetable, Miracle but it still makes for fascinating reading.

The third meal I found to be the most exciting.  Pollan spends a week with Joel Salatin, a self-described “Christian, conservative, libertarian, environmentalist, lunatic farmer!”  When I read that I had to stop and read it to Scotty.  There are so many elements in that description that I love and feel could apply to me!  Except for the “farmer” aspect of it, I’m pretty much all those other things.  Anyway, Joel Salatin runs a gorgeous, entirely self-sustainable farm in Virginia.  PolyFace Farm is the sort of place I want to buy my eggs, chickens, beef, pork and vegetables. Reading about it was fascinating – the efficiency, the beauty of seeing something work the way it was designed to, reading Salatin’s diatribes paired with his obvious respect for the land of which he sees himself as a steward.  The process is so incredibly efficient – instead of turning petroleum into food, Salatin turns sunlight (free, clean, efficient) into food as a grass farmer.  The grass feeds the cows, who it turn provide fertilizer for the fields, which are groomed by the chickens who act as natural pesticides, etc., etc., etc.  It’s a beautiful process in which nothing is wasted.  Nothing.  It made me want to move out to a farm.  And it made me appreciate the fact that my mom had a chicken coop built in our yard when I was young.  I hated mucking that thing out – it was disgusting – but I now know the difference between a free-range, organic egg and an egg that comes from a CAFO – and there is no way anyone can argue with me that they’re the same!  And I was made aware of where food comes from and the role animals play in providing us with protein.  Joel believes in allowing a chicken to “exercise its chickeness” and giving pigs the opportunity to live the life of rooting around that they love – and it’s a difference you can taste.  The precise details of how this farm is managed are fascinating!  Absolutely fascinating.  I think that this was the most interesting part of the book – the one that I kept reading parts out loud, interrupting Scotty from whatever he was reading and saying “Listen to this!”

Michael Pollan’s final meal is one that only contains elements he’s grown, foraged, or hunted himself.  This takes him mushroom hunting in northern California (this part contains an mind blowing section on mushrooms and what exactly they are), boar hunting in the Sierra Nevada foothills, seeking salt in the San Francisco Bay Area, and purloining plumbs from branches that hang over property lines.

I would definitely recommend this book to anyone whether or not you’re interested in food or agriculture.  The thing that “got” me the most was the beauty, intricacy, and complication of the natural world.  Creation truly is a marvel and this book made me appreciate things about it that I had never even given a thought. 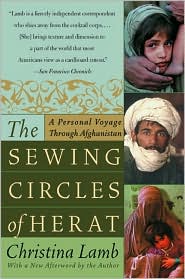 I picked up The Sewing Circles of Herat at the book store where I volunteer and have enjoyed learning more about Afghanistan’s history and culture.  Joining books like Three Cups of Tea this one gives a great deal of Afghan history – something I found helpful in answering some of the questions I’ve been mulling over.  Christina Lamb first went to Afghanistan as a starry-eyed teen and fell in love with the friendly, hospitable people she found there.  Returning nearly 15 years later, Lamb finds Afghanistan has been devastated by the Russians and the Taliban.  Yet in the face of overwhelming odds she is still able to find those pockets of people who persist in their love of freedom and country. This book tells that story. 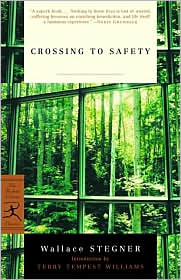 I love it when the opportunity to reread a favorite book presents itself!  I’ve probably read this book 3-4 times already but I love Wallace Stegner’s Crossing to Safety.  It is beautifully written, the story is poignant, it’s everything you want in a novel.  I don’t want to give too much away, but you should go out and pick up this book – it’s one of the best books on friendship I’ve ever read.

Hi! After five years in Europe, I'm adjusting to life back in the US. I use this blog to record my adventures, post photos, organize recipes, and post about things that interest me.
View all posts by Rebecca →
This entry was posted in Books, Food, Thoughts and tagged Books, Eating, Food, Omnivore's Dilemma. Bookmark the permalink.